With the entry of Texas Governor Rick Perry into the Republican nomination race and the TQ spreadsheet we have a new Pants on Fire pander co-champ. Perry's 7 PoF ratings tie him with Michele Bachmann. And I thought Bachmann had that race sown up. Still, Bachmann's PoF percentage is twice Perry's suggesting he is a mere pretender to the throne.

With his departure from the nomination race and return to political obscurity, Tim Pawlenty has been retired from the TQ rankings. He has suffered enough. 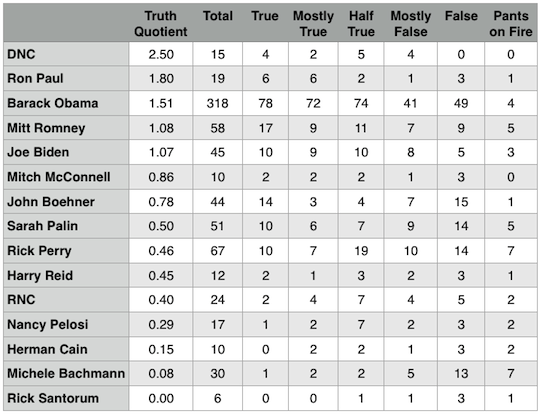 About the Truth Quotient
Email ThisBlogThis!Share to TwitterShare to FacebookShare to Pinterest
Posted by Panderbear at 7:28 AM