While Panderbear was birding in Ecuador, U.S. political panderers continued to ply their trade. President Obama moved into first place in the TQ ratings among individuals by standing still. Ron Paul, perhaps demonstrating the power of reversion to the mean, fell precipitously due to Mostly False and Pants on Fire statements. Vice President Joe Biden continues walk the fine line between anti-panderer and panderer with a TQ of 1.00. Rick Perry's TQ rating dropped in parallel with his polling numbers. Rick Santorum dug deep and mustered his first unequivocally true statement, thus jumping ahead of chain emails, Michelle Bachmann, and Herman Cain. Michele Bachmann took possession of last place, with Herman Cain a nose behind in their race to the bottom. 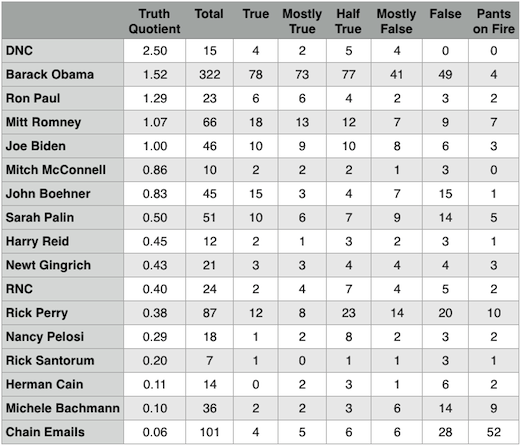 About the Truth Quotient
Email ThisBlogThis!Share to TwitterShare to FacebookShare to Pinterest
Posted by Panderbear at 7:27 AM