In the only recent change of TQ ranking Senate Majority Leader Harry Reid leapfrogged Sarah Palin by virtue of a single slightly-more-true-than-not statement. Reid is, however, in no danger of escaping Panderers Row anytime soon. That would require a truly unprecedented string of true or mostly true statements.

The big news is the addition of Senator Bernie Sanders of Vermont to the rankings. Sanders debuts with a respectable TQ of 1.00, which means, unlike most politicians, his statements are as good a predictor of the truth as a coin flip. Like Ron Paul, Bernie has a habit of making insightful and sometimes outrageous statements that often as not turn out to be true. As the first avowed socialist in the U.S. Senate, Bernie Sanders brings a refreshingly different perspective to the American political scene. To the consternation of conservatives everywhere Vermont voters' heads did not explode at the thought of electing a democratic socialist to political office. He has served Vermont as mayor of Burlington, U.S. Representative for 8 terms, and since 2006 U.S. Senator. Even more vexing for conservatives, Vermont does not seem to have suffered any detectable damage from its scary flirtation with demon socialism. 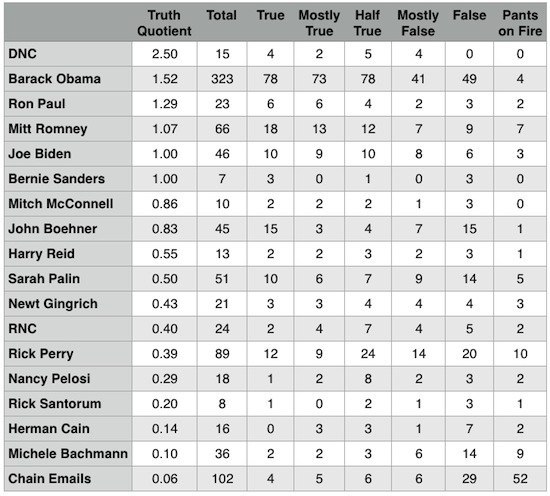 About the Truth Quotient
Email ThisBlogThis!Share to TwitterShare to FacebookShare to Pinterest
Posted by Panderbear at 1:39 PM