You can tell the Republican nomination race is heating up just by watching the TQ ratings of the contenders. They're headed south. Mitt Romney, who only scant weeks ago sported an enviable TQ nearly the equal of President Obama's, has skidded to a score of 1.0. Flip a coin. Improbably, that puts him in a 3-way tie with both Vice-president Joe Biden and Vermont Senator Bernie Sanders.

In another statistical fluke the Democratic National Committee maintains a relatively lofty TQ of 2.5 while the Republican National Committee's rating would have to increase by a factor of 2.5 just to escape panderer territory.

Rick Santorum, Michele Bachmann, and Herman Cain continue their race to the bottom. Cain pulled out all the stops, compiling a series of falsehoods sufficient to wrest sole possession of last place in the TQ standings from Michele Bachmann. Incredible. If he keeps up this pace Cain could give chain emails a run for their money. 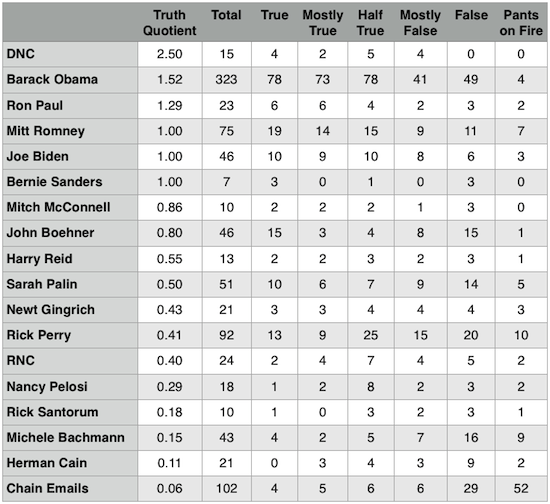 About the Truth Quotient
Email ThisBlogThis!Share to TwitterShare to FacebookShare to Pinterest
Posted by Panderbear at 7:55 AM