Occupy Wall Street activists carry signs saying, "We are the 99%." The point is the top 1% of the income spectrum is subject to a fundamentally different set of rules than the rest of us. The 1% now enjoy far more favorable tax treatment and net income outcomes than at any time since immediately preceding the Great Depression. While everyone else is struggling through the effects of wage stagnation and the Great Recession, the economic elite have had smooth sailing, building both incomes and wealth. The chart shows what currently prevails isn't your father's income distribution; it's your great-grandfather's distribution. 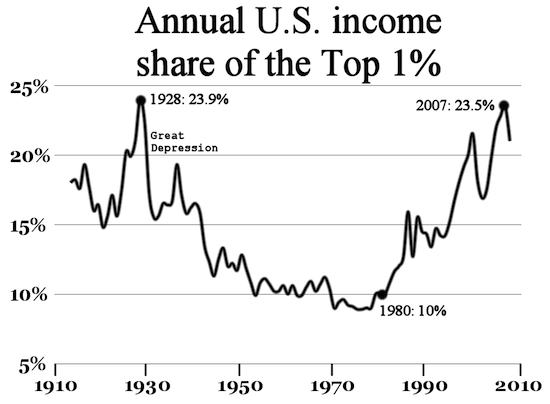 Panderbear is aware that correlation is not proof of causation. Nevertheless, the last time this country had a similarly skewed income distribution, things did not turn out well. Financial market collapse followed unbridled speculation and presaged a protracted period of economic and social strife during which socialism and even communism enjoyed considerable followings.

Post-WWII America was characterized by a more egalitarian income distribution and overall prosperity. The American Dream was alive and well. Construction of the interstate highway system, the first manned Moon landing, and other successes engendered relatively positive attitudes toward government. It was this time of optimism, progressiveness, and trust in government in which Panderbear grew up.

All that changed dramatically following the 1980 election of Republican President Ronald Reagan, panderer extraordinaire. Ignoring both sound economics and arithmetic, Reagan pushed through Congress, with the assent of feckless congressional Democrats, massive tax cuts flattening previously more progressive income tax rates. What followed was an historic 3-decade upsurge in the incomes of and concentration of wealth in the top 1% at the expense of the middle class.

In a reprise of the 1920's and 1930's we've experienced boom and bust - speculative financial and real estate bubbles, Great Recession, Tea Party insurrection, and now Occupy Wall Street. If we ignore history and continue to compound our woes with regressive tax rates, corporate deregulation, anti-labor policies, and under-taxation of both corporations and the wealthy, we will not soon see again the optimistic America Pandercub knew.

Email ThisBlogThis!Share to TwitterShare to FacebookShare to Pinterest
Posted by Panderbear at 10:09 AM