The chart shows the Truth Quotient (TQ) history for each of the leading candidates in the 2012 presidential election race over the past two and a half months. In order to have discernible resolution at the low end a logarithmic TQ scale is used. Also note that the data points for different dates are equally spaced even though the time intervals are not equal. Panderbear is only able to do so much on his laptop. As benchmarks, the TQ histories for the Democratic National Committee (DNC), Republican National Committee (RNC), and Chain Emails are included.

The data are bracketed by the DNC results on the high side and Chain Emails on the low side. RNC results are somewhere in the middle, but well below the flip-of-a-coin mark which lies at a TQ of 1.0. The chart shows three distinct non-overlapping groups: those who tell the truth most of the time - Huntsman, Obama, Paul, and Romney; those who are somewhat less reliable than a coin flip - Perry and Gingrich; and those who, to put a generously, are truth-challenged - Santorum, Bachmann, and Cain. 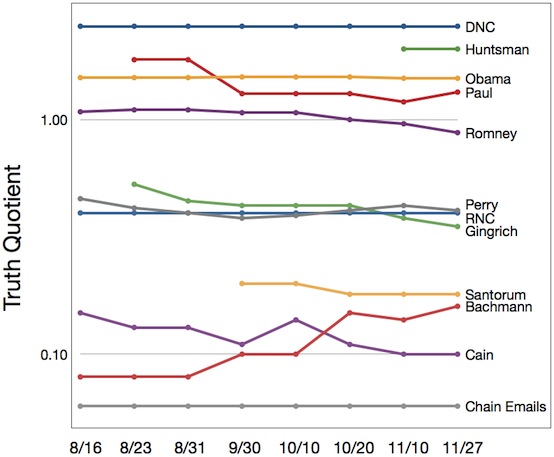 Panderbear is intrigued by the consistency of the three tier grouping. Though Paul and Romney slipped a bit during the period covered by the chart they are in no danger of transitioning to a lower tier group. The middle tier is especially tightly grouped though Gingrich moved gradually from the top to the bottom of this group. Surprisingly, to Panderbear at least, in the lower truth-challenged tier Bachmann actually gained ground while Cain slumped.

To Panderbear's eye there still appears to be no particular correlation between the candidates' TQ and their standing in the polls (not shown). Jon Huntsman leads the TQ rankings, but is stuck near the bottom in the polls. Cain is barely clinging to top tier status in the polls even while he continues in the TQ cellar. Gingrich's surge in the polls is not reflected by so much as a ripple in the TQ rankings. So far none of the data contradict Panderbear's preliminary conclusion that Republican voters don't know or just don't care whether their candidate choice tells the truth or not. Sad.