Both Joe Biden and Mitt Romney escaped the flip-a-coin TQ of 1.0. Joe climbed back up into anti-panderer territory while Mitt Romney continued his slow, inexorable decline ending up in Panderers Row. Congressional leaders mostly remained silent except for Harry Reid who issued a "mostly false" statement and consequently fell into a tie with Sarah Palin. How embarrassing. Newt Gingrich took a real dive, plunging below both Rick Perry and the RNC. Meanwhile Herman Cain consolidated his last place position among individuals and continued his relentless pursuit of chain email's level of verisimilitude. Panderbear notes that both Newt's and Cain's plunges in TQ were simultaneous with significant increases of their popularity in Republican polls.

Panderbear regrets his slight of John Huntsman and has added him to the standings. Huntsman comes in with an outstanding TQ of 2.0 and takes over first place among individuals, relegating President Obama to second. Huntsman is second overall only to the DNC. Apparently, Huntsman's habit of telling the truth has not endeared him to Republican voters as he trails badly in the polls. Panderbear is not surprised. 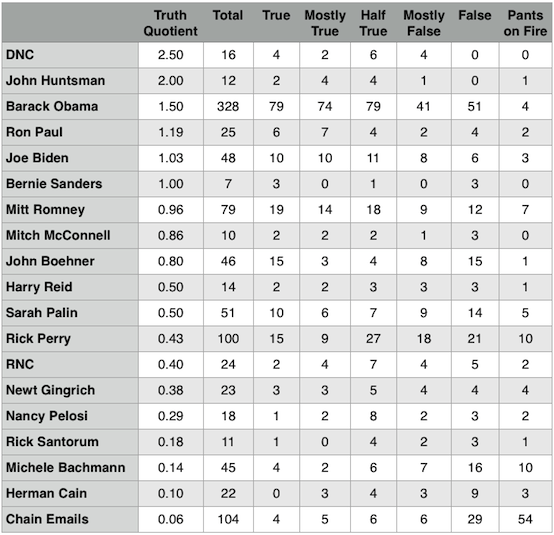 About the Truth Quotient
Email ThisBlogThis!Share to TwitterShare to FacebookShare to Pinterest
Posted by Panderbear at 8:30 AM