Panderbear goes for a little birding trip to Arizona and all hell breaks lose. Prior the currently reported period the candidates' Truth Quotients had been relatively stable over time. They were divided into three mutual exclusive groups: truth-tellers, truth-challenged, and pathological prevaricators. No individual had ever crossed over from one group to another.

That has all changed. Not one, but two candidates have switched groups. Rick Santorum jumped to the intermediate group while Newt Gingrich's TQ cratered leaving him in a near dead heat with Michele Bachmann in the nether regions of the TQ chart.

The other notable change was Jon Huntsman's TQ plunge. President Obama's TQ of 1.5 is now good enough for first place with a little breathing room to spare. While the president's stellar ranking could change if Ron Paul, Huntsman, or Mitt Romney were to suddenly issue a string of incontrovertible truths, an unlikely event in Panderbear's view, don't expect the president's TQ to change much. He simply has had too many statements rated (330) for a few more to move his TQ very much one way or the other. Sometimes standing still wins the race. 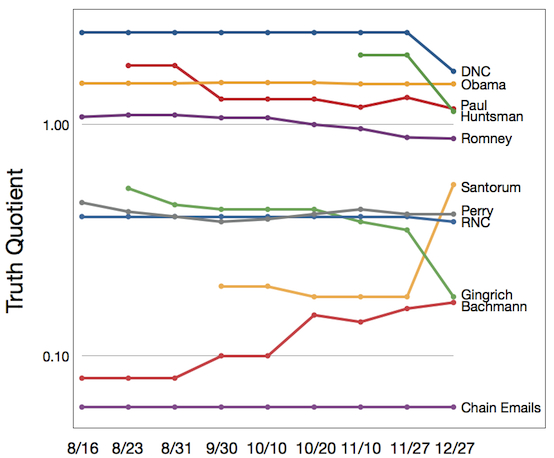