There have been several significant changes to the Truth Quotient rankings.

The biggest news is the crash of the Cain Train. As a consequence, our cellar dweller, Herman Cain, has been removed from the standings leaving Michele Bachmann once again in sole possession of last place. Rich Santorum surprised to the upside moving ahead of Nancy Pelosi and Newt Gingrich, though Newt's decline due to a Pants-on-Fire statement rating was helpful.

Sarah Palin has also been dropped from the rankings on the grounds that she is no longer even a prospective candidate and anyway, Panderbear is tired of looking at her name. Panderbear hated to do it but Bernie Sanders was also dropped from the rankings. He just didn't have enough rated statements to make his TQ statistically significant. Mitt Romney continues his gradual downward glide slope. Joe Biden and Ron Paul both improved their TQ's marginally. The DNC shed enough TQ points to drop into a tie with John Huntsman at a still very respectable TQ of 2.0.

Given his 329 total rated statements President Obama's TQ isn't likely to change precipitously, but he did eek out an increase of 0.01 to 1.51, second best among individuals. 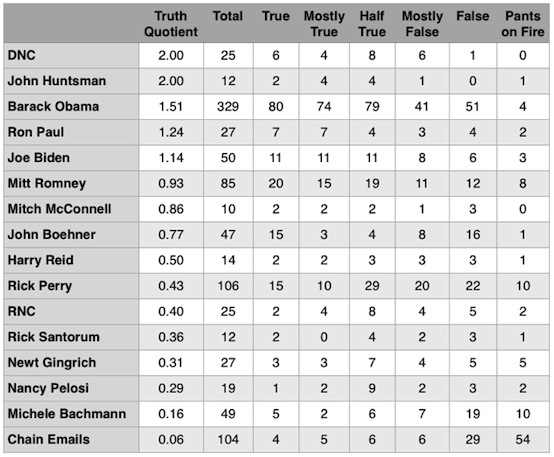