Suddenly, President Obama is alone atop the Truth Quotient rankings. The president's TQ has hardly changed since last August. Meanwhile, all of the candidates who formerly accompanied the president in the rarified air above the TQ=1.0 break-even mark have succumbed to the pressures of a competitive campaign.

TQ's for all Republican candidates are now underwater. The departure of Michele Bachmann and Jon Huntsman from the race leaves three tiers. Ron Paul and Mitt Romney reside a bit under the flip-of-a-coin mark. Rick Santorum and Rick Perry are lower down in Congressional leadership territory, and Newt Gingrich has picked up Bachmann's mantle in the TQ nether regions.

TQ's for all candidates but one slipped since the previous ranking. Gingrich's TQ rose slightly, but he isn't likely catch any of the others anytime soon. 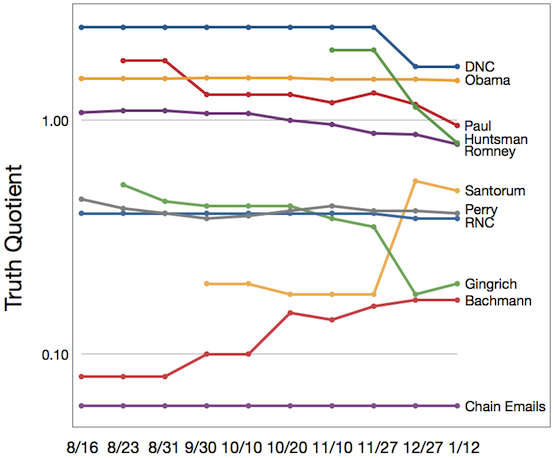