There just isn't any generous way to put it. Much of the opposition to government social programs derives from the ignorance of the electorate and the willingness of conservative politicians to pander to that ignorance.

A 2008 study by Suzanne Mettler, Cornell's Clinton Rossiter Professor of American Institutions, published in Perspectives on Politics demonstrates a disconnect between fact and perception. According to Mettler's survey 44% of Social Security recipients, 43% of those receiving unemployment, and 40% of those on Medicare say they “have not used a government program.” The percentages are even higher for the lesser known so-called submerged state government subsidies. (Blue in the chart.) 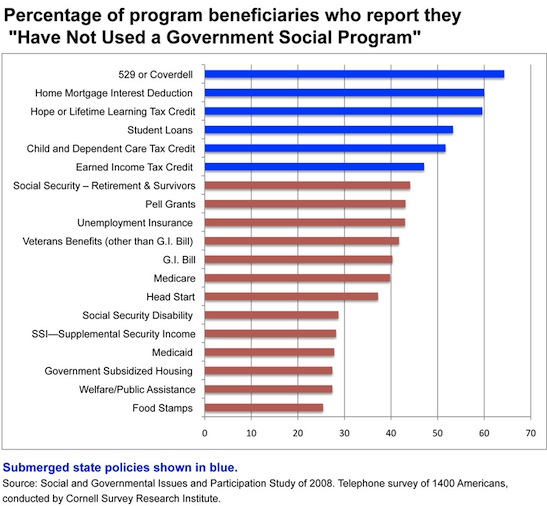 It's little wonder that low-information voters oppose generic government aid programs. They have little understanding of what those programs are and who is benefiting from them. Ill-informed conservative voters seem to think that only freeloading slackers receive government benefits when in fact the better known programs primarily benefit (90%) the elderly, disabled, and working families. "Real" self-reliant Americans are also largely unaware that they themselves have likely benefited from submerged state subsidies.

Ignorance may be bliss, but it doesn't make for sound public policy.