Panderbear is no military expert, but it seems reasonable that in determining the amount of defense expenditures an important factor should be the military threats we face. How much are our enemies or potential enemies spending on defense? The chart published in the Business Spectator based on 2009 global military spending data from the Centre for Arms Control and Non-Proliferation sheds some light on that issue.

A mere glance at the table shows the United States is spending a disproportionate amount on defense compared to any other country, nearly as much as the rest of the world put together. That seems a bit excessive to Panderbear. U.S. military spending is 6 times that of China, 10 times that of Russia, and 100 times that of big bad enemy du jour, Iran. Given our NATO allies, Japan, Saudi Arabia, and South Korea are highly unlikely adversaries, combined defense spending by the U.S. and its hardcore allies constitutes better than 3/4 of global military spending.

Panderbear finds these numbers disturbingly disproportionate. Even as Republicans claim the U.S. is going broke and we need to cut Social Security and Medicare spending, they are proposing huge increases in the defense budget. WTF? We are already spending enough on defense to take on the rest of the world with one hand-grenade tied behind our backs. What possible justification is there for spending more?

Historically, disproportionately large militaries have led to instability, conflict, and war. This pattern has already proven true for the U.S. which has been in one or more military conflicts continuously for the entire 21st century. Cutting our military budget by 2/3 would still leave us a military twice the size of the world's next contender, one far less likely to be used in foreign adventures, and would make a huge dent in the budget deficit without raiding programs for needy children, the elderly, and the disabled. 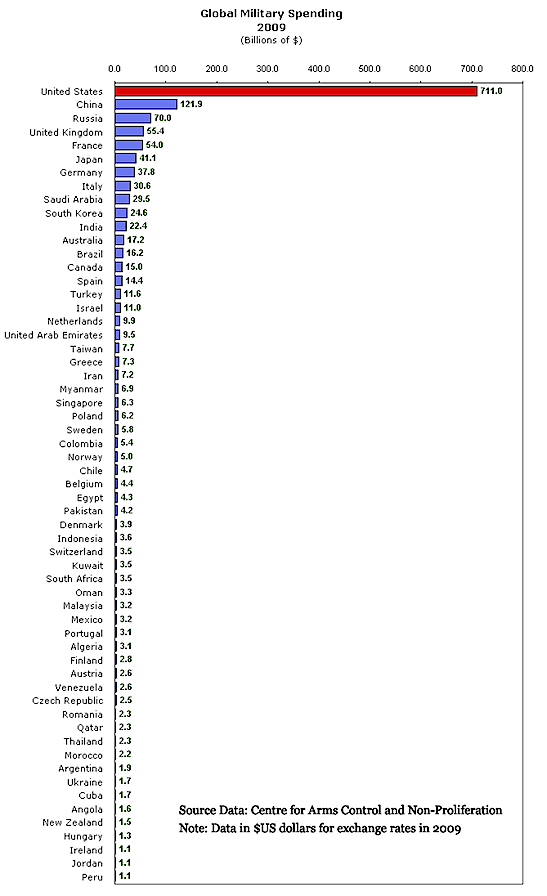