As far as Panderbear knows the chart of Bureau of Labor Statistics data regarding cumulative change in employment appeared first on Think Progress and then subsequently on MoveOn.org. MoveOn.org's take is that the data refute, "The main gist of Romney’s campaign ... that there have been no jobs created during the Obama administration, except for the public sector (government)." The Think Progress headline is slightly less overtly partisan, "Economy has recovered all private sector jobs lost since Obama took office." I guess MoveOn.org's primary intention is to make Mitt Romney out to be a liar (Panderbear doesn't dispute that), while Think Progress is satisfied to give President Obama a boost.

The data show a slow but persistent decline in public sector jobs with a temporary blip that consisted of federal census takers. Private sector jobs initially continued the precipitous drop that began during the Bush administration, but reversed course and began an uninterrupted increase since March, 2010. 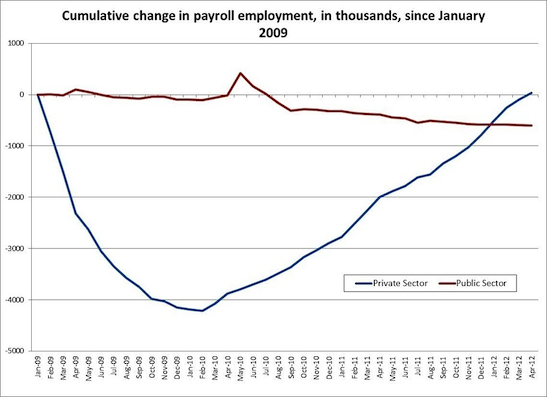 You can see why Democrats always talk about private sector employment over the past 20+ months and why Republicans focus exclusively on precisely two data points, total public and private employment now versus when President Obama was inaugurated. The latter is the greater pander as it obscures the larger context and trends and also does not allow time for the president's policies to be implemented and take effect. Academic studies normally include a time-shift of ~12 months. Applying that criterion in this case would show a large net gain in employment for Obama, not the slight loss indicated by two fortuitously chosen data points.

Due to Bush's Great Recession state tax revenues declined and teachers, policemen, firemen and other state employees were laid off. Panderbear thinks that outcome could have been averted if Congressional Republicans hadn't dug in their heels against either a larger stimulus package or a second stimulus consisting largely of transfers to the states. Republican intransigence has led to harmful disruption of essential state services and needlessly high levels of unemployment. Their slavish adherence to failed economic principles is exasperating. Their willingness to hurt the U.S. economy in order to defeat President Obama is reprehensible.