Government by and for the Rich 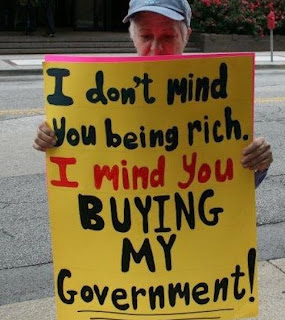 Among the rich there will always be some, like the Koch brothers, willing to expend a portion of their fortune to influence public opinion in ways calculated to advance their own selfish interests at the expense of the public good. Few would deny that money has substantial influence in elections of members of state legislatures, governorships, members of Congress, the presidency, and therefore legislation.

The dual notions of money-speech equivalence and of corporate personhood which ultimately led to the notorious U.S. Supreme Court decision in the Citizens United case has untethered the Koch brothers and their ilk from previous constraints and multiplied their ability to subvert our government to their own narrow interests.

So do we point our fingers at corporations, the Koch brothers, and other deep-pocketed interests and call them out for subverting our democracy and turning it into an oligarchy of the rich? Panderbear's question is why anyone would expect them to behave in any other way? Does anyone really expect corporation's and the rich not to act in ways they believe are in their own best interest? Their actions, while calculated to empower and enrich themselves at the expense of all others and which has ultimately led to the loss of truly representative democracy, are nevertheless for the most part perfectly legal, coldly rational, and facilitated by a conservative Supreme Court.

Part of the solution to the effective disenfranchisement of the average American is to push back against corporations and other bad actors. We are fortunate that the rise of Occupy Wall Street has brought this and related issues to the attention of the American people. Panderbear thinks that attempts to limit or eliminate the notions of money-speech equivalence and corporate personhood are all to the good, but are at best delaying actions and in the end will likely fail.

Panderbear ultimately blames the loss of government for and by the people on an electorate that stubbornly refuses to vote in accord with its own rational self-interest. The electorate is generally ill-informed or misinformed regarding good public policy due to apathy, dependence on torrents of televised and printed partisan propaganda, or slavish adherence to unexamined political, social, or religious doctrine. Until the average voter educates themselves to the important issues of public policy through the application of fact-based logical reasoning and best science rather than simply seeking confirmation of the personal biases by pandering politicians, government for and by the people will be an illusion, a chimera always out of reach.