Panderbear has shown mercy and deleted the sorry Truth Quotient (TQ) histories of the candidates for the Republican nomination that have officially dropped out. Ron Paul is still included because it's not clear that he has officially dropped out, even though Mitt Romney has clinched the nomination. Paul could yet be a disruptive force before or during the Republican Convention.

As usual the DNC, RNC, and chain-email TQ's are included as points of reference. Note that TQ is plotted on a log scale; otherwise, the chain emails would be coincident with the x-axis. To put it as gently as he can, Panderbear thinks that anyone who reads or forwards chain emails is a blithering idiot.

The DNC TQ history brackets the candidates on the top side and the RNC provides the floor. Panderbear speculates that this is a reflection how logically supporting Republican dogma requires more dubious arguments and tortured "facts" than Democratic policies.

Among the candidates only President Obama remains in truth-telling territory, TQ>1.0. Indeed, the president's TQ really hasn't changed in the entire 9+ months included in the chart. Both Ron Paul and Mitt Romney began above water, but through the course of the Republican nomination campaign have slipped slowly, but inevitably, into panderer status. Indeed, Romney's TQ has descended into the ignominious ranks of Congressional leaders.

It will be interesting to see if President Obama's and Governor Romney's TQ's suffer once the general campaign begins in earnest. Panderbear is thinking that the president's TQ will hold up pretty well while Romney's is likely to continue its downward trend as he begins to defend his indefensible record as governor and gets creative with his anti-Obama attacks. But we'll see.

We'll also see whether the electorate gives a damn who tells the truth and who doesn't. Panderbear finds no reason to be optimistic on that score. The majority of voters seek bias confirmation, not truth. 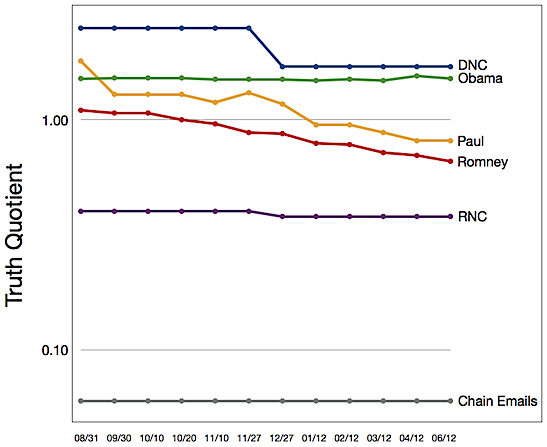