Now that the Presidential political campaigns are well underway, indeed only weeks remain until its conclusion, Panderbear decided it was time to review where the candidates, President Obama and Governor Romney, stand with regard to their respective Truth Quotients (TQ). Panderbear speculated in previous posts that as the contest proceeded the candidates would find it increasingly difficult to adhere to the truth.

Well, it turns out that Panderbear was only half correct. The pressures of the campaign have indeed taken quite a toll on Mitt Romney's TQ. While a year ago Romney's veracity was a slight favorite over the toss of a coin (TQ a tad greater than 1), sadly he has steadily declined to a TQ of just 0.58. His disgracefully mendacious performance in the first presidential debate was no help at all. This is the pattern Panderbear expected. However, President Obama's current sterling TQ of 1.49 is almost exactly the same as it was in September of 2011.

If you care which candidate is more truthful, the choice is clear. If you don't care who is telling the truth Panderbear respectfully requests that you refrain from voting. You're not helping.

Note that the chart, as in previous posts, uses a logarithmic scale rather than linear. On a plot using a linear scale Romney's final TQ (0.58) would be much closer to the chain email data point (0.05) than to President Obama's (1.49). So Romney's performance has been even worse than it appears in the chart.

As always the TQ for chain emails is truly dismal. If you bother to read chain emails, or worse yet forward them, for the love of God please stop. You are embarrassing yourself and misinforming other people. Just stop. 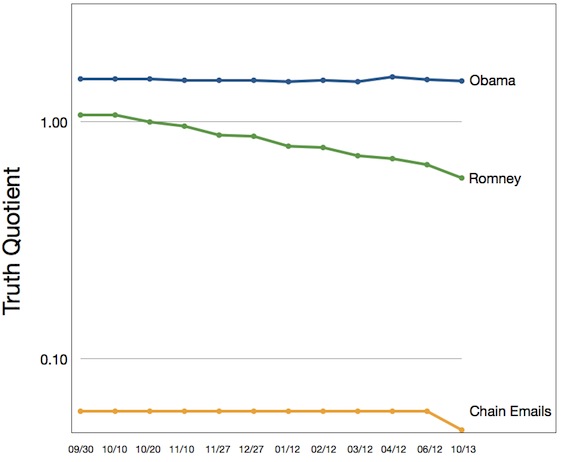 About the Truth Quotient
Email ThisBlogThis!Share to TwitterShare to FacebookShare to Pinterest
Posted by Panderbear at 10:13 PM