As the race for the Republican nomination heats up it is taking a considerable toll on the Truth Quotients of most of the candidates.

Jon Huntsman relinquished his first place standing to President Obama in a stunning plunge that dropped him below Ron Paul as well and into a tie with Vice-President Biden. Ron Paul also lost some ground leaving the president in a class of his own atop the TQ standings. Good president.

Mitt Romney and Rick Perry continued their slow declines. Rick Santorum blurted out a single true statement which vaulted his TQ above that of Rick Perry. Meanwhile, Newt Gingrich's descent accelerated to such an extent that he only narrowly missed resting last place from Michele Bachmann.

Non-combatants, including Democratic and Republican leaders in Congress, were little changed. 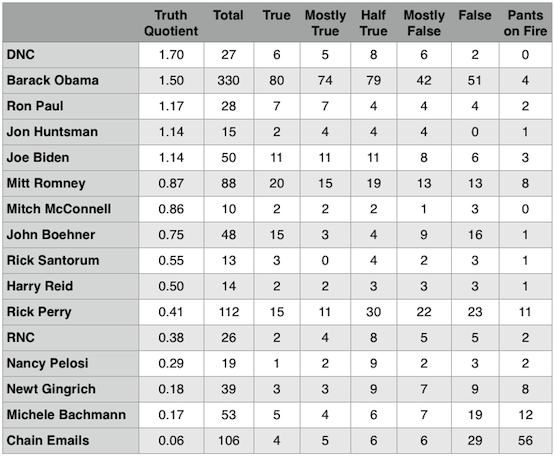